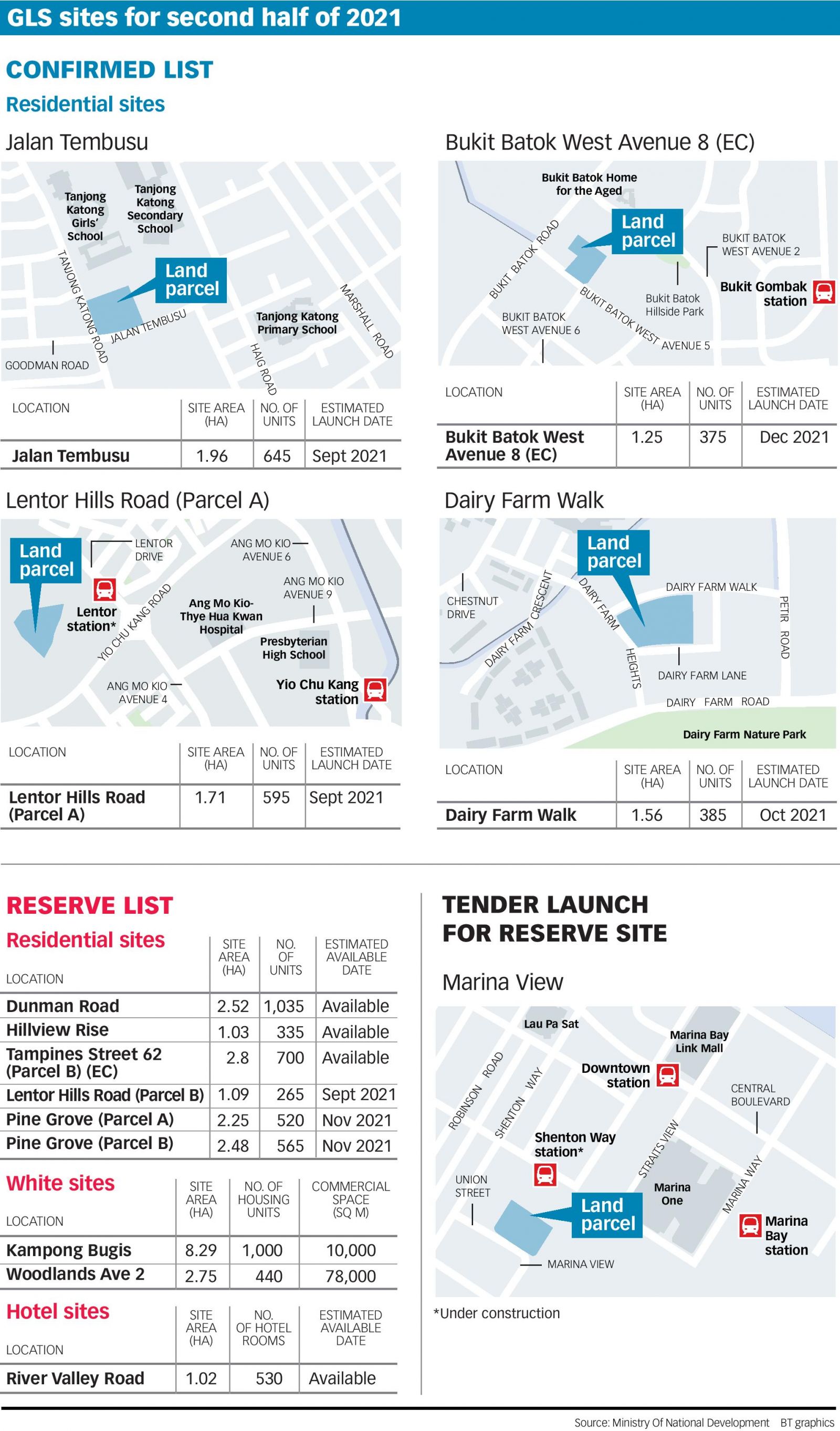 Singapore
THE bump in the supply of private housing on the Confirmed List under the H2 2021 Government Land Sales (GLS) Programme is a calibrated move by the government - one that will nonetheless be welcomed by developers hungry to replenish their landbank amid diminishing inventory, analysts said.

Despite the sizeable increase in supply over the H1 2021 Confirmed List, JLL's senior director of research & consultancy Ong Teck Hui described the programme as conservative, adding: "The recent wave of Covid-19 infections that prompted heightened measures shows that the economy and residential market can be disrupted from time to time by the pandemic. This creates more uncertainty and will have an impact on transaction volumes and possibly prices."

Cushman & Wakefield's head of research (Singapore), Wong Xian Yang, said: "Amid economic uncertainties, the government is erring on the side of caution and leaving most of the units in the Reserve List, allowing the market to dictate market supply."

On the Reserve List are six residential sites, two white sites, as well as a hotel site at River Valley Road. This works out to another 4,860 private residential units (including EC units), 90,000 square metres (sq m) gross floor area (GFA) of commercial space and 530 hotel rooms. Of the six residential sites, three are newly introduced, namely two parcels at Pine Grove and one at Lentor Hills Road.

Sites on the Reserve List are launched only upon successful application by a developer or when there is sufficient market interest in a site.

In a release on Thursday morning, the Ministry of National Development (MND) said: "The unsold inventory of private housing units has declined over the past year amidst strong demand. Nonetheless, even as the economy is recovering from the recession in 2020, there are continued uncertainties in the economic and labour market conditions due to the ongoing Covid-19 situation globally and locally."

As such, the government has decided to moderately increase the supply of private housing on the Confirmed List to 2,000 units, MND added.

This comes after MND beefed up private housing supply from confirmed sites under the H1 2021 GLS programme by 17.2 per cent.

Ismail Gafoor, chief executive of PropNex, said: "We believe the move to offer more sites in the OCR may help to stave off a potential supply crunch in this sub-market, providing buyers - many of whom may be HDB upgraders - with a wider selection of mass market homes."

Analysts reckon sites on the Confirmed List that will most likely appeal to developers include the Jalan Tembusu site in the Tanjong Katong area, which can yield 645 units, and an EC site at Bukit Batok West Avenue 8, which can yield 375 units.

JLL's Mr Ong reckons that the EC site will be sought after, owing to the moderate supply of new EC projects in the West. He said: "It is good to offer an EC site in the West, after releasing the Tampines Street 62 site (under the H1 2021 programme) so EC buyers are able to find opportunities in different geographical areas."

The EC site is near a recent tender at Tengah Garden Walk which was awarded for S$603 per square foot per plot ratio, said director (research) at Huttons Asia, Lee Sze Teck. Mr Lee added: "This site may fetch lower taking into consideration that it is not within walking distance to an MRT station."

Knight Frank's head of research, Leonard Tay, said: "The sites that are likely to be triggered on the Reserve List would be the smaller ones where 600 units or less can be built, as larger sites in excess of 800 units do not currently appear to be appetising for developers given the increased financial risk, as well as the challenge of not being able to sell out within the timeframe for Additional Buyers Stamp Duty remission."

Cushman & Wakefield's Mr Wong also reckons the Lentor Hills Road parcel on the Reserve List could attract developers given that it is the smallest site in the GLS Programme, and will benefit from greater accessibility once the Thomson East Coast Line is up and running.