MORE urban rooftop farms may soon crop up after the Urban Redevelopment Authority (URA) expanded its landscape replacement policy to allow rooftop urban farms and vertical greens to be used to replace the greenery lost due to development. 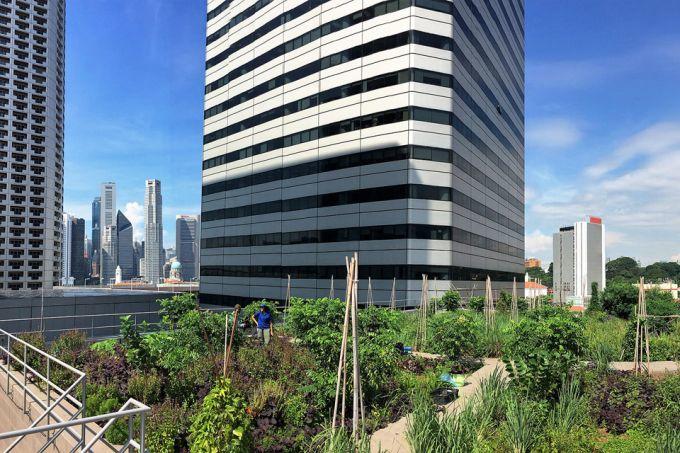 MORE urban rooftop farms may soon crop up after the Urban Redevelopment Authority (URA) expanded its landscape replacement policy to allow rooftop urban farms and vertical greens to be used to replace the greenery lost due to development.


URA on Thursday said the Landscaping for Urban Spaces and High-Rises (Lush) programme will now be expanded such that up to 10 per cent of the hardscape area can be provided in the form of urban rooftop farms.

As a guide, at least 40 per cent of the overall required landscape replacement areas should be for permanent planting (softscape); the rest can be made up of communal and recreational facilities like event plazas and playgrounds (hardscape).

In addition, vertical greenery and inaccessible green roofs can also be counted towards fulfilling the landscape replacement requirements, up to a cap of 10 per cent of site area.

These come on top of the horizontal and communally accessible space with greenery such as roof gardens and sky terraces that currently qualify.

A URA spokesman noted that the practice of urban farming has picked up both in scale and sophistication globally in recent years, but remains nascent in Singapore.

It is hoping to make a bigger push for commercial farms - large-scale, high-productivity, high-intensity farms, usually with restricted access and which sell their produce commercially - over community farms, as the former play an additional role in boosting Singapore's food security.

URA said it has received enquiries in recent years on setting up urban rooftop commercial farms, but few have materialised into actual applications.

But most rooftop farms are still smaller-scale community farms. There is one atop a seven-storey tower at Khoo Teck Puat Hospital in Yishun, and another on the rooftop of architecture firm Woha's office on Hong Kong Street, which also serves as a place that employees can find reprieve in the midst of a hectic work day.

A spokeswoman from the Agri-Food & Veterinary Authority of Singapore (AVA) said: "While there is growing interest from companies to develop edible rooftop gardens as part of their corporate social responsibility efforts, the concept of rooftop farming in Singapore is still new and limited to small-scale community-based farming."

Small-scale community-based farms do not require URA's approval. For farming activities conducted on a commercial basis, farmers have to apply for a farm licence from AVA and can approach URA and building owners to seek support and approval for rooftop use.

Traditionally, rooftops have been used to house mechanical and electrical equipment, with the remaining rooftop space often left unused.

A spokeswoman from Edible Garden City, which champions the grow-your-own-food movement in cities, said the company hopes to utilise underused places such as rooftops and office space to grow vegetables to help Singapore become more self-sufficient in its food supply and reduce its food miles - the distance food is transported from the time of its production until it reaches the consumer.

URA is thus encouraging developers and building owners to replace mechanical and electrical equipment on rooftops with urban farms and communal roof gardens; the relocated equipment space can be exempted from gross floor area computation.

Today, two out of three new residential developments have applied for at least one Lush incentive. More than half of shopping centres, offices and hotels have also taken up these incentives.

The programme has contributed more than 130 hectares of greenery, URA said. The total amount of Lush greenery islandwide has been increasing at an annual average of 15 per cent. The programme has also contributed to high density clusters like the central area and other new growth nodes and regional centres.

View articles from these categories